We envisioned a vibrant cottage industry in West Virginia where jobs, market opportunities, training, and educational resources abound for West Virginia’s artists, artisans, crafts people, and food producers, and our rich cultural heritage and artisan skills and traditions are preserved and strengthened for future generations of West Virginians.

The Tamarack System will be recognized globally as a dynamic catalyst and premiere showcase for all aspects of advancing West Virginia arts, crafts, food products, and those who produce or perform them. 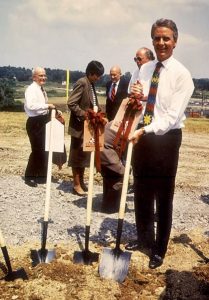 Tamarack: The Best of West Virginia is the nation’s first showcase of handcrafts, fine art and regional cuisine. It comprises a warmly decorated retail store, working studios for resident artisans, a fine art gallery, a theater, A Taste of West Virginia food court, and the Tamarack Conference Center.

A visionary governor, Gaston Caperton, set the stage for Tamarack’s conception, and in October 1989, the Parkways Authority issued a $143 million bond; a small percentage was set aside to upgrade rest areas along the turnpike, and concession revenues from these – not toll revenues or tax dollars – were to fund tourism and economic development projects.

As the new director of Economic Development and Tourism, Cela Burge wanted to connect West Virginia craftspeople with turnpike travelers. West Virginia products sold in the new service plazas were a big hit. During the grand opening of the Princeton Center, complete with musicians and a big pot of apple butter cooking, Governor Caperton told David Dickirson, a member of the Parkways Authority’s Board of Directors, that it would be wonderful to have a place with that type of atmosphere every day of the year. Thus, the idea for Tamarack was born.

During the next six months, Burge and her colleagues met with craftspeople far and wide; outlined a strategic marketing plan for developing the new center; began searching for architects; expanded warehouse facilities; and planned fact-finding visits to art and craft centers in several states. The Greenbrier agreed to assist with food service management.

A Design & A Name

In May 1993 Clint Bryan and his associates, Doug Bastian and John Harris, won the project. Their proposed design was arresting, innovative and eminently functional. A Beckley firm, Radford and Radford, won the construction contract.

Artisans were involved in the construction of Tamarack. West Virginia artisans created structural elements – and were paid by contract – a year before visitors ever touched Tamarack’s handcrafted door pulls. The jury process to select products sold at Tamarack, was in place since before the facility existed to insure quality and authenticity of WV-made items.

At the official groundbreaking on August 8, 1994, visitors sampled food from The Greenbrier, including the fried green tomatoes that have become a signature of Tamarack.

Behind the scenes, Tamarack’s staff and jurors continued their work. Artisans who passed the jurying process then received an initial order. For some, it was the largest order they had ever received. By June 1995, Tamarack had placed orders with more than 900 artisans. By the end of 1996, more than 1,300 West Virginia artisans were selling their wares at Tamarack, over 450,000 people had visited, and sales had topped $3.3 million. In December, the one-millionth visitor walked through the doors.

Tamarack’s popularity as a gathering place and the more than fruitful partnership with The Greenbrier sparked the idea of adding a conference center. The grand opening for the Tamarack Conference Center was held on June 20, 2003.

Tamarack has continued to grow. More than 2,800 artisans from all fifty-five counties have become part of the Tamarack family. Gross revenues have topped $78 million and purchases for goods and services have exceeded $65 million. And as of May 21, 2012, Tamarack welcomed its 7 millionth guest.

This history was created from excerpts of Tamarack at Ten by Colleen Anderson and other sources. 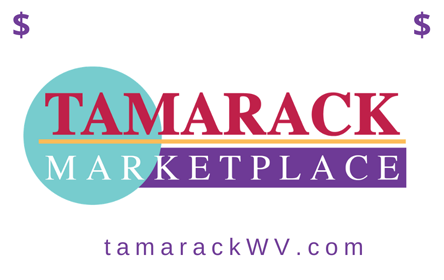